I won’t plague you with Christmas recipes, for by now you will have had your fill, literally and figuratively I am sure.   But how wonderful for a few weeks to indulge in recipe hunting, dreaming of the perfect menu, hoping for the perfect day.   I love all of it.   Unfortunately for me, this year I managed to dose myself with food poisoning a week before, so by the time Christmas Day came around, I wasn’t too enamoured with eating, or, (maybe worse) partaking of a bubbles or two.  But sometimes you just have to do what you have to do 🙂

The day’s work fell to Mr MWCED, who to his credit did a lot of prep the day before.  I did glaze the ham, albeit a small one – as the table this year was set for 3.   Still,  for 3 people we did good.

We started with Prawns, with a coriander and chilli sauce, set on a bed of freshly picked rocket.  Mmmmmmm.

A Moet & Chandon Rose Imperial went well with this, it had light berry flavours, was crisp and reasonably dry.

Following the first course we had a small break and launched into the mains.    There was a deboned and stuffed chicken, sticky glazed roast ham with mustard sauces, new potatoes and roasted asparagus, plus a freshly picked lettuce, rocket and snow pea salad.     Just a perfect combination.

The chicken had an Italian pork sausage, cranberry and walnut stuffing.  A total favourite combination of flavours.  Mr MWCED used a number of recipes to come up with just the right stuffing mix. 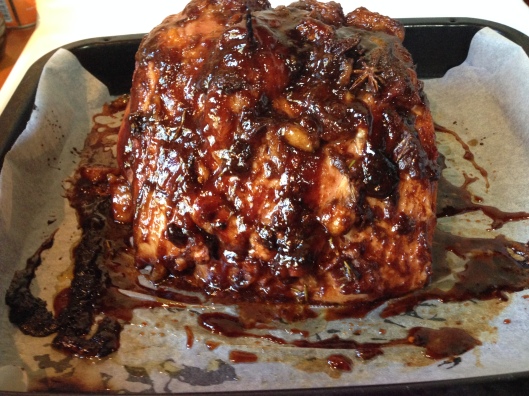 The ham was from a Jamie Oliver recipe out of the December 2015 Issue 116 Woolworths Fresh magazine (recipe here).   It had ginger, hoisin sauce, soy, five spice, sesame oil, nutmeg and much more.   Our piece of ham was about half the size that the recipe called for,  though I made about the same amount of glaze.   It was Very Delicious.

To complement our lunch, we opened a bottle of Nga Waka Home Block Chardonnay 2014.  I was given some bottles of this local wine as a gift.  Yoweeee,  what a wonderful gift!   It was superb.   (ngawaka) 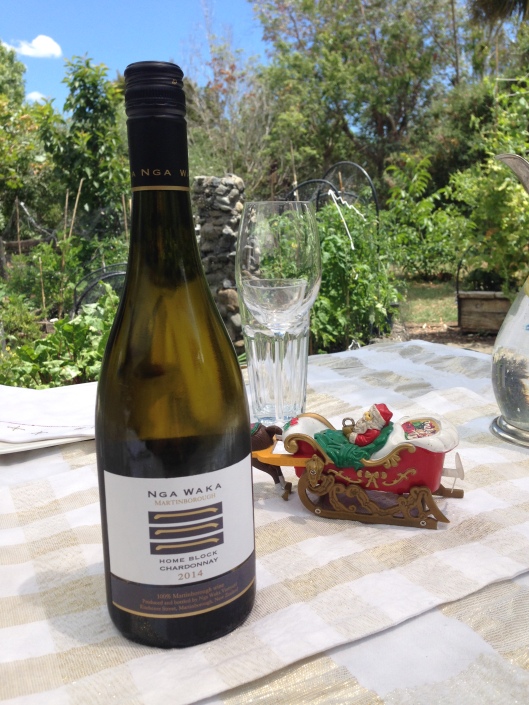 And then, do you know,  we were so full that the thought of dessert just didn’t tempt us.   So the Raspberry Parfait just had to wait until another day.

Now of course it has been ham sandwiches all the way!  Who can complain though,  wonderful weather,  great people, tasty food and good wine.  Roll on 2016!

A Merry Christmas and Best New Year Wishes to All.